Just a few map images I have collected.

This map is from Expedia.com.  Highways 14 and 141 have been omitted, as are the county borders, but it has several old villages listed.  Two notable exceptions are Epworth, located south of Carmi, and Rising Sun, more commonly called Dogtown, south of Emma. The large Marshall Ferry cemetery is located there, and sometimes the area is called Marshall Ferry. Epworth is located on Big Prairie and Big Prairie Church and cemetery, where some of the first settlers in the county came before 1810.  You can see from this map why the area economic development agency calls itself "Wedge", for the triangle formed between the two north-south highways and the interstate.

This map is from the IDOT website, where there is an interactive version of the official state highway map.  It does have a better view of county roads and boundaries but I cut off part of Norris City, all of Gossett, and the top of Grayville. 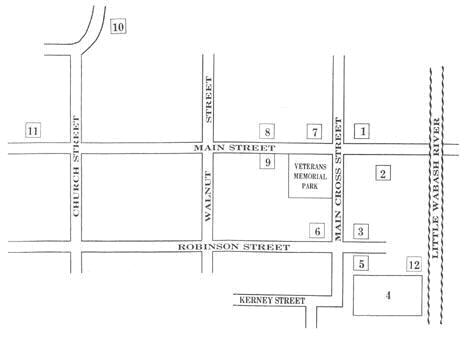 This is a walking tour map of Carmi, which I found at the City of Carmi site. Here is the legend:
1.  White County Courthouse, built 1883.
2.  "The Castle", common name of James Robert William home, built 1896, and listed on the National Register of Historic Places. Now a private residence, also used for display of antique furniture for sale.
3.  Webb Hay house, built in 1876 for Carmi mayor and banker Frank E. Hay. His in-laws were the Webb family, which includes State Senator Edwin B. Webb. Now used as a private residence but open for occasional private dinners.
4.  Old Graveyard, which was the final resting place for most Carmi citizens who died before the 1890s', when Maple Ridge cemetery was established.  The last burial was of Miss Mary Jane Stewart in 1966.
5.  The Matsel Cabin, owned by the White County Historical Society. This structure was built in approximately 1853 about two miles SW of Carmi and moved to town in 1996.
6.  The Robinson-Stewart House, which originally was built in 1814 as John Craw's log cabin. Remodeled several times by US Senator John Robinson, who served from 1831 to 1843. His granddaughter, Miss Mary Jane Stewart, gave the house and contents to the Historical Society in 1966.  The property is on the National Register.
7.  I guess this is for the Carmi City Hall and Light and Water office.  This structure was built in the 1950s by Mayor Brandt, and originally had a jail in the basement and fire station in back. Not an historic structure in my mind, but it is also home to the Carmi Chamber of Commerce.
8.  L. Haas Store Museum, built as the Bankrupt Store in 1896 by the Storms family for Louis Haas, a Jewish German immigrant.  It was purchased by the Historical Society in 1992 to house its ever-growing collection of artifacts. It is on the National Register.
9. The Ratcliff Inn, built in 1828 by James "Old Beaver" Ratcliff, first White County Clerk/Treasurer. The federalist structure was close to demolition when the White County Historical Society purchased it in 1960 with borrowed funds and rehabilitated the structure. The first floor is currently open for exhibits, while the upstairs served as the Society's first museum. It was placed on the National Register along with the Robinson-Stewart House.
10.  Carmi Presbyterian Church, built about 1900, highly prized for its beautiful sanctuary.
11.  Colonel  Everton  Judson  Conger, built about 1870, partially with proceeds he received from leading the military unit which captured and killed John Wilkes Booth, assassin of President Lincoln.
12. One Room School, a country school (is it Randolph or Rudolph?) built about 1870, moved to town about 1994 by a group of retired teachers and now used as a museum. It is actually in the block down from the Matsel Cabin, and is behind the VFW.

One glaring omission on the map is the Carmi Carnegie Library, built 1914, located near #10. It was donated to the White County Historical Society in 1998 and now houses its genealogy library and offices.

Here's a nice map of Illinois with all of the state's 102 counties listed and named.  I am so familiar with Illinois that I can tell the validity of a lead just by remembering the relative location of counties, but I have done some research in Texas in the past year or so and have to refer to a map constantly.

There's a web site in my links page with the changes in Illinois counties listed which is really useful in developing migration patterns in the state.  The area on the west side of the state--Madison and St. Clair Counties--were the first parts of Illinois to be settled, by the French.  Gallatin and White were among the first counties settled in the eastern side of the state, as they were natural gateways for people traveling down the Ohio River or up from Kentucky, Tennesse and the Carolinas in the first couple of decades of  the 19th century.  Settlers then moved throughout the state, many times first starting towns along the Mississippi and Illinois rivers, and preferring hilly areas to the marshy and unhealthy prairies.

The Illinois Central railroad, built in the 1840s and 1850s, and the Civil War, which made Chicago a major trading center, brought many immigrants from Europe and migrants from Ohio and eastern states.  Railroads and mining also added some unique groups of immigrants, such as the Italians to Herrin and the Poles to the Posen area.  Many of the Germans who migrated to White County were from the Baden area, while the Irish around Enfield were from the old Queens County area but were joined by immigrants they met in the east and Cincinnati. 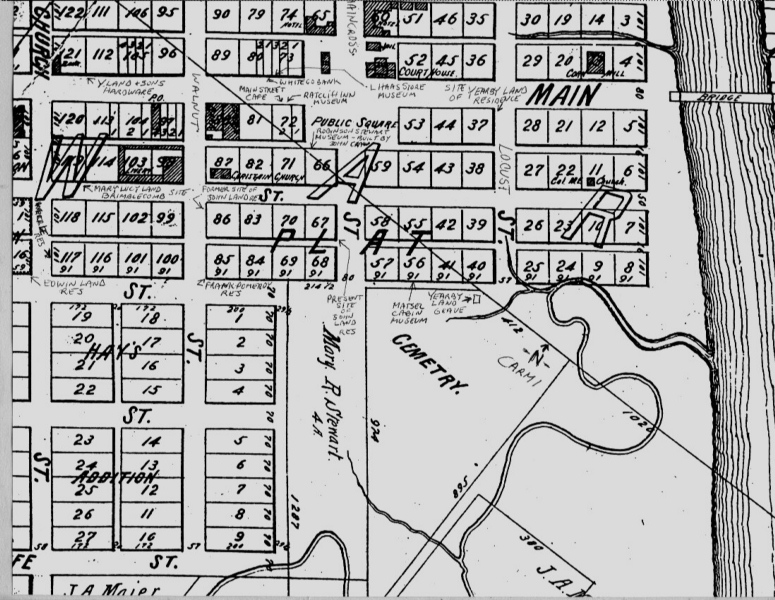 This is downtown Carmi from the 1901 Atlas with some modern notations. I think they might have come from Jay Davis. 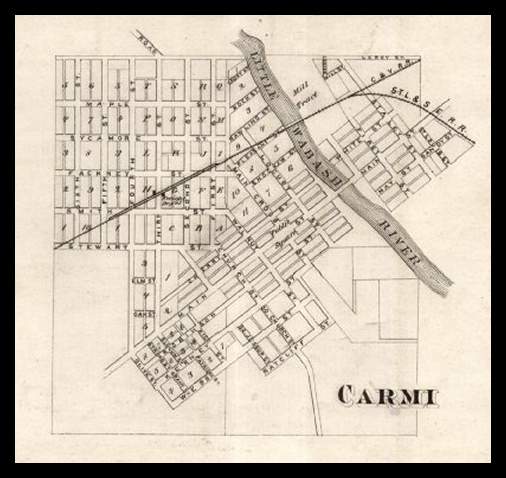 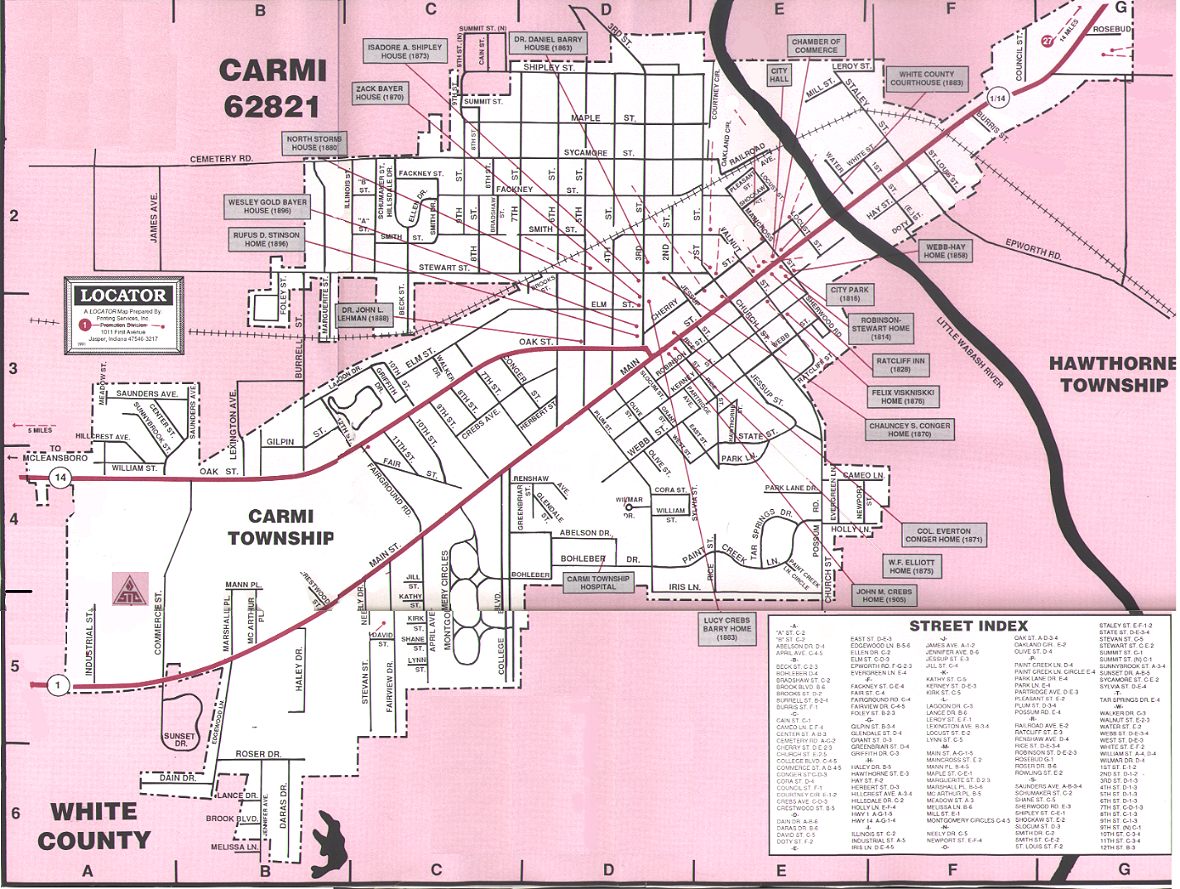 This map is really big, but has many notations of historic homes and other places. I guess it comes from around 1990.

Copyright ©1998, 1999, 2000 by Cindy Birk Conley, all rights reserved. For personal use only. Commercial use of the information contained in these pages is strictly prohibited without prior permission. If copied, this copyright notice must appear with the information.