Heritage House Articles
Right now this is a sample of the articles and photos of the homes. We hope to add more as we find good articles and have the time to post them. 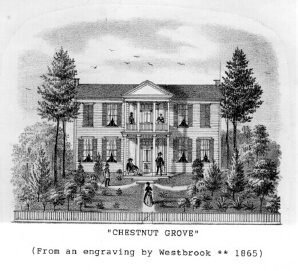 November 07, 2000
'Chestnut Grove' named 'Heritage House'
By BARRY CLEVELAND Of The Times Staff
A country home built before the Civil War and beautifully restored in recent years was honored Monday night with the White County Historical Society's Heritage House Award. The society presented the annual award to "Chestnut Grove," a two-story frame home owned by Henry and Jane Absher of Carmi and located in the heart of the farm southwest of Carmi long known as "the Williams section." Illness prevented the Abshers from accepting the award in person, but Rich Gurka, who lives in the home, accepted on their behalf.

The presentation was made at the end of a program that included slides and a narrative of the home's history and restoration by Kent F.P. Boeger, a past president of the society. The occasion was the annual fall membership meeting of the society, held at the VFW Hall in Carmi, and a crowd of more than 120 people attended. It was the final general membership meeting at which Larry B. Hughes of Carmi, the society's president, would preside, as those present unanimously elected a new slate of officers  headed by Jim Pumphrey, who will take the group's reins Jan. 1.  Lawrence Martin was elected vice president, Sue Calvert secretary, Cindy Birk Conley treasurer and Sue Armstrong,  Boeger, Marjorie Brown, Marjorie Fechtig, Linda Minear, Rick Stein, Lecta Hortin and Sam Endicott were elected directors. Hughes will serve on the board as immediate past president.

Boeger's narrative included an extensive discussion of the background of the "modest Greek Revival" home. He noted that  John Perryman, who then owned the property where the house now sits, referred in his 1858 will to the house "now being  built."  The property was sold in 1862 to Samuel D. Ready, an Irish  immigrant to Carmi (whose name adorns the East Main Street building that now houses Pat's Porch in Carmi and who erected an earlier building there that bore his name). He acquired  nearby parcels of land through the early 1860s. The Ready family lived in Carmi but the house was apparently occupied by a resident overseer named Corcoran (or Cochran). William St. John became the overseer in 1871. Sarah Jane, a daughter of Samuel and Lucinda Ready, was  married to Albert R. Shannon in June 1845, and she inherited the real estate after her father died in 1869. The property passed eventually to their daughter, Mary D. Shannon, who married James Robert Williams in 1884. By 1888, she had acquired a total of 660 acres--the entire section and an additional 20 acres nearby. Throughout this time the farm's overseers lived in the house, which had been dubbed "Chestnut Grove."

The narrative noted that from its earliest days the farm  produced corn, oats, hay, winter apples and chestnuts, and the record includes lists of fruit trees planted in the 1870s and a detailed instruction to the tenant farmer on how to prepare a mix used to "wash" each tree twice annually. Boeger also quoted from a number of family letters from the period which provided a flavor of country life at the time.He noted, for instance, that steamboats regularly traversed the Little Wabash River, when the water level was high enough, carrying freight from White County down river. And he referred to an 1870 bill of $92 for clearing 23 acres of  ground, and $51 for making and putting up a rail fence of  about 3,400 hundred rails. The owners were, in the late 19th century, among the county's most prominent people. James Robert Williams, the husband of Samuel Ready's granddaughter, Mary D. Shannon, was a lawyer who served as a county judge from 1883 to 1887 and was elected to Congress, serving from 1889 to 1895 and again from 1899 to 1905. He was the Democratic nominee for U.S. Senate in 1903 and received the votes of several delegates to the 1904 national party convention for the vice presidential nomination. The couple is perhaps best remembered today for the imposing mansion they built at the end of the 19th century on the southeastern corner of Main and Main Cross streets--a home which still stands and is known by some as "The Castle."  Though they lived in town, the couple remained attentive  toward the farm. Boeger quoted from a 1903 order the Congressman made for 100 ornamental trees from the U.S.Department of Agriculture.

The speaker interspersed his narrative with personal notes, recalling that his parents bought a 40-acre farm adjacent to "the section" in 1929. He recalled the long driveway leading from the township road to the main house, a huge catalpa tree at its entrance and a very large barn that stood nearby when he was a child. Known as "the apple barn," it was built from timbers used in the construction of the Russian exhibition building at the St. Louis World's Fair of 1906, he said. The Congressman had the timbers shipped by rail to the Trumbull station, about 1.25 miles north, where they were loaded onto wagons and pulled by mule teams to the sight. There they were assembled. Boeger said the driveway through the barn was so large that two wagons could meet and pass, and the main support posts (fashioned from redwood and two feet square) were 30 feet apart. Originally designed to store apples, by the '30s the barn was used to store the farm's wheat and    corn, he said.

Boeger said Mary D. Shannon Williams died in 1934 and her son, Robert Ready Williams (born in 1889) inherited the farm.By that time, he said, the productivity of the cropland had declined, and much of the farm had grown up in species such as sassafras and persimmon. The chestnut trees for which the house had been named had become blighted and the apple orchards diseased, fields were marked by gullies and the apple barn had become neglected. Robert R. and Claire Williams signed an agreement with the White County Soil & Water conservation District in 1946 to undertake conservation and restoration practices on the farm. Williams died two years later, but his widow (who lived in the Carmi mansion) continued their commitment. Fields were contoured, waterways and ponds constructed, crop rotation     established and fertilizers properly used. Thickets were  cleared and between 1954 and 1967, 117,000 trees were planted, including red gum, bald cypress and loblolly pine. Kenneth Stephens and his family moved onto the section in 1952 and stayed until relocating to their own home in 1976.

They were honored in 1969 by KMOX Radio in St. Louis as the outstanding conservation family in the southern half of  Illinois. By this time 360 of the farm's acres were given to raising corn, beans, wheat and clover, and another 120 acres were forested. In 1976, Claire Williams began the process of restoring the old home; the original one-story section in the back (built of logs) was completely replaced. The lower portion of the porch was replaced, first floor flooring replaced and a bathroom installed on the first floor. Boeger noted that the flooring was of tulip poplar and that all of the lumber used in the home's construction was from the farm and had been milled on site.

Claire Williams subsequently died and her son, Bob (who with his wife, Dodie, had relocated to Carmi by that time) later the same year, suffered a heart attack while at work on the farm. The property was sold in 1993 to the Abshers, and more restoration was begun. The second story front porch was restored to its previous appearance, shutters added, front doors restored and a shake-style roof was added. Landscaping was done, and Rich and Mary Jane Hinchman Gurka moved in. The new tenants planted flower gardens, bricked patios and did substantial work inside the house, said Boeger.

The speaker then took his listeners around and through the house with the benefit of colored slides, taken by Jerry Wright, and he took note of the antiques, family heirlooms and other furnishings throughout the two-bedroom home.After Hughes presented the Heritage House plaque to Gurka, the longtime Department of Natural Resources employee (conservation officer for White and Gallatin counties) expressed his thanks to Dale Peters, who he said did most of  the most recent restoration. Gurka also credited Debbie South and Niece Edwards with the wallpapering, Doug McFall with  much of the interior work and Marvin Allen with much of the painting. And he added that his former wife (who now lives in Lake County) also deserves much credit. 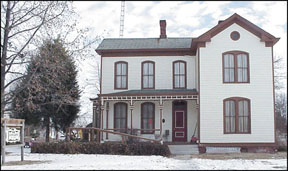 The Felix Visknisski home was named a heritage house in 1974, when owned by the Jackson family. The home was built in 1876 for a Polish immigrant, who came to Carmi in about 1868 and married a local girl, Carrie Clayton. Felix operated a general merchandise store, owned several farms, and was an early shareholder in White County Bank. The Viskniskki family owned the home until 1968, when the Jacksons purchased it. They were followed in the 1970s by two other short-term owners until James and Cindy Conley bought the property in 1981, when it became James' law office. The home was damaged by fire in 1998 and was not fully restored until 2002, after the death of Mr. Conley. Mrs. Conley now lives in the structure and uses it as an accounting office. 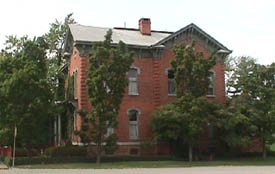 The Webb Hay house received the Heritage House award in 1995, while owned by Kent Boeger, long-time chairman of the Heritage House committee. The home was certainly a worthy choice, as it was built by the Webb and Hay families in 1876 but had been used as a rooming house from at least the 1920s to the 1980s, when Kent and his wife Timmye rescued the derelict property. It has a sturdy Italianate design and fantastic architectural trim around the windows and roof. Much of the work on the house was done by the Boegers themselves. In 2000 the Boegers decided that health problems made the large home too much work for them and sold it to the Jim Minnick family, who lived in the house until 2007. In 2008 it was purchased by Glenn and Mary Coleman, who also own the nearby "Castle". His son and daughter-in-law are living in the home at present. 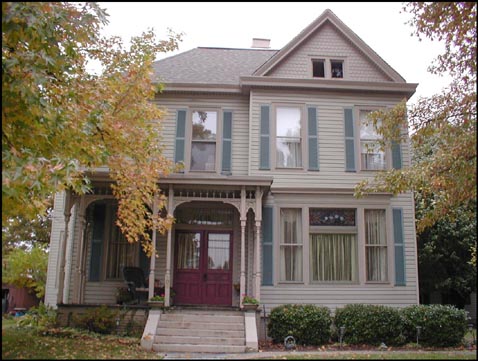 The Morris Blasker house, under restoration by the Terry Gholson family, was named a Heritage House in 2002. You can see the marvelous late Victorian details. I should have the complete article somewhere on my computer.

Don't forget the Rootsweb home page, where you can find a wealth of information : Rootsweb Home Page

Go back to the homepage.

Last updated 6/6/2010. Please send corrections and comments to [email protected] Your help will be appreciated.